Background to the University of the Third age

The use of the word University in the title comes from the medieval concept of a “community of scholars” who come together to learn from one another. In this environment, learning is an end in itself, individuals learn what they like, at a pace they prefer. No qualifications are required to enter, neither are any qualifications awarded. U3As are voluntary, self-help organisations. They tap the great reservoir of knowledge, skills and experience which is to be found among older people and which is often undervalued or overlooked. All of the teaching, planning and administration of a U3A is carried out by its members. Classes are planned jointly by tutors and students in response to members’ interests. The area of study is negotiated to meet the needs of the learning groups; a course may be short or long, depending on the requirements of the subject and the interests of the group.

The first University of the Third Age was founded in Toulouse, France in 1972. The idea spread rapidly not only throughout France but to many other countries, particularly in continental Europe. An international Association of U3As was established by 1975. In the latter part of 1984 the first Australian U3As  were formed in Melbourne. There are now more than 124 member organisations and over 10,000 members throughout Australia.

The Forster-Tuncurry branch was established in May 1994.

If you join the U3A you will find people of like interests and, no doubt, like most of us who are already members, you will make friends and enjoy outings both social and educational. 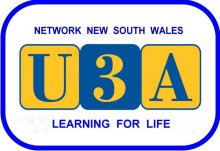